Which energy efficiency policies saved the most last year?

We are periodically asked how much different policies have saved and which policies have had the largest impact. In our recent report on energy efficiency progress over the past 35 years, we reviewed many current energy savings estimates and projections. Here I wanted to summarize which policies appear to be saving the most energy today, looking at estimated energy savings in calendar year 2014. Our estimates are summarized in the table below.

Vehicle fuel economy standards generated the largest energy savings in 2014, saving an estimated 7.3 quadrillion Btu of energy (called a “quad”; by way of scale, the US uses about 100 quads of energy annually). These figures, from the Department of Transportation (DOT), represent progress since standards first took effect in 1978 under legislation passed under President Ford. Furthermore, DOT expects these savings to grow substantially in coming years as a result of new fuel economy standards that have been set in recent years.

The second largest savings, 5.4 quads, come from minimum efficiency standards on appliances and other types of energy-using equipment. These estimates come from a 2012 report with updates by Joanna Mauer of the Appliance Standards Awareness Project. Congress has enacted standards on more than 50 products, beginning with legislation signed by President Reagan, and the Department of Energy (DOE) periodically revises these standards.

Third on the list is the ENERGY STAR program, including ENERGY STAR homes, buildings and equipment. EPA estimates that this program saved about 380 trillion kilowatt-hours (kWh) of electricity in 2013 (2014 data not yet available), which works out to 3.8 quads.

Fourth is energy efficiency programs funded by utility customers, and operated either by the utilities themselves or by other entities designated by states and utilities. These programs help utility customers save energy, reducing energy bills, and also help the utility and all ratepayers because saving a kWh is generally less expensive than generating a kWh. In 2013, these programs saved about 160 billion kWh (1.6 quads), and based on the increase in savings from in 2013, we estimate 2014 savings at about 1.8 quads. The data come from DOE’s Energy Information Administration as analyzed in our 35-year look-back.

Building energy codes appear to be next on the list, saving an estimated 1.1 quads in 2014. This estimate is explained in a note at the end of this blog. Several model building energy codes were developed in the 1980s and are regularly updated, typically every three years. Most states adopt one of these model codes as a statewide code, and where a state does not have a code, major municipalities may adopt a code.

Federal government energy efficiency research and development (R&D) appears to result in a similar level of savings as building codes but this estimate is very uncertain. Our figure is based on 2014 estimated savings from a 2001 study, which in turn is based on work by the National Academy of Sciences and the President’s Council of Advisors on Science and Technology. DOE has a substantial energy efficiency R&D effort that has contributed to such energy-saving products as LED lighting, electronic ballasts for fluorescent lamps, windows with special heat-reflective coatings, and advanced building analytic software. DOE has conducted more recent evaluations on individual R&D projects, but no one has compiled these recent evaluations into an estimate of the overall savings and other benefits from DOE’s R&D program.

Energy service companies are private companies that generally identify, finance and install energy-saving measures and then manage their maintenance for the terms of their contract. Most of their contracts in the US are with municipalities, universities, schools and hospitals— institutions that are often capital short but are willing to enter into long-term contracts. A Lawrence Berkeley Laboratory study estimates they saved 0.34 quads of electricity in 2012, but we round up to about 0.5 quads to include savings in other fuels as well as savings from 2013 and 2014 projects.

Rounding out our look at energy policies, federal energy efficiency tax incentives saved about 0.3 quads (2014 estimate from a 2011 study). Congress passed these credits in 2005 to encourage improvements in homes, appliances and commercial buildings. Many of them have since been extended.

In reviewing these figures, several words of caution need to be kept in mind. First, these estimates come from a variety of sources and employ different methodologies. They should be considered approximate and not exact. Some of these estimates, such as for building codes and R&D, are highly approximate as discussed above. Second, there is likely some overlap between these savings estimates, and thus these figures should not be summed without adjusting for overlaps. In particular, there is likely overlap between ENERGY STAR, tax incentives, utility-sector programs, and energy savings performance contracts.

In our paper looking back on the past 35 years, we estimated that in 2014, energy efficiency measures implemented over the previous 35 years reduced US energy use by about 58 quads. Savings from the eight policies discussed here probably total a little under 20 quads (they total 21 quads but we round down due to overlap between policies). The remaining savings of about 40 quads are likely due to a combination of market forces as well as some policies not cataloged here, with the market forces probably dominant.

A Note on Savings from Building Energy Codes

Savings from building codes are approximate and are estimated from two sources. The two estimates are very similar, providing some assurance they are reasonable.

First, in 2004, we estimated savings in 2000 from codes adopted in the 1980s and 1990s, and also projected savings in 2020 from codes. We used these figures to estimate savings in 2014 by taking the estimate of 2000 savings from that report (0.537 quads), plus taking a portion of 2020 estimated savings based on construction through 2013, resulting in an estimate of 1.14 quads saved in 2014. The 2004 report estimated 0.935 additional quads in 2020, and we took 9/15 of these estimates, since the original estimate included 15 years of construction, nine of which took place by the end of 2014. The 2004 estimate for 2020 included projections of future code stringency and adoption and compliance rates. In retrospect, we were too conservative on stringency and a little too aggressive on adoption and compliance, but a back-of-the-envelope estimate indicates that these effects roughly offset each other.

Second, in 2014, Olga Livingston from Pacific Northwest National Laboratory, along with co-authors, estimated the impact of the DOE Building Energy Codes Program. For 2014 they estimated savings of 0.57 quads. However, their estimate did not include four states (California, Florida, Oregon, and Washington, since DOE had little impact on these states); their estimate excluded an estimate (details not available) on what states would have done without DOE support; and their estimate did not include codes developed prior to 1992. We made rough estimates to adjust for these three factors. For the four states, we added to the savings based on the population in 2014 of these four states relative to the other states, adding 25%. For state actions not due to DOE, we added 30%, which is just a guess. For savings from pre-1992 codes, we took half of Nadel’s estimate for 2000, as this estimate included pre-1992 codes. After all three adjustments, the estimated savings from codes in 2014 totals 1.19 quads.

Both of these estimates are highly approximate, so rather than round up to 1.2 quads we round down to 1.1 quads. Better estimates of energy savings from codes would be useful. Tentatively, PNNL tells us that they are planning to do such an analysis in 2016. 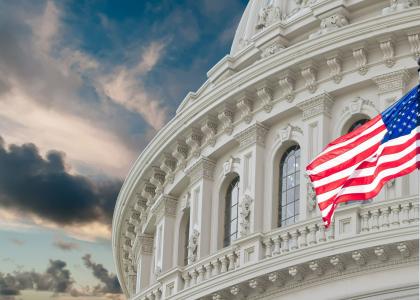 Blog Post
Congress Is Set to Vote on the Largest Efficiency Investments in History
August 2, 2022
© 2023 All rights reserved.