Washington, DC—All-electric vehicles (EVs) now account for fewer of the dozen greenest cars available, partly because of a shift toward larger and heavier EVs that are less environmentally friendly, according to this year’s GreenerCars ratings, released today by the American Council for an Energy-Efficient Economy (ACEEE).

These EVs take only four of the top spots on the ratings’ “Greenest List” for 2022 vehicles—down from seven last year. Three of the previous top EVs—Hyundai Ioniq electric, BMW i3s, and Kia Soul electric—are no longer sold in the United States. Some have been replaced by larger versions with heavier batteries, such as the Hyundai Ioniq 5 and BMW i4, that cause more greenhouse gas emissions.

As a result, energy-efficient gasoline hybrids account for five of the greenest cars—up from only two last year. They include Honda's Insight, two by Hyundai (Elantra Blue and Sonata Blue), and two by Toyota (Camry LE and Corolla). The other seven greenest cars are plug-in hybrid vehicles, including the #1 scoring Toyota Prius Prime, which reclaims the spot it held in 2020, and #2 Hyundai Ioniq, or all-electric cars such as the Mini Cooper SE Hardtop 2-door (#3) and the Nissan Leaf (#4).

The 25th annual GreenerCars ratings come amid continuing tumult in the automotive industry. The ongoing COVID-19 pandemic disrupted the industry’s supply chain, leading to widespread vehicle and parts shortages. At the same time, the Biden administration announced a goal for 50% new EV sales by 2030 as well as new emissions and fuel-efficiency standards. Both announcements have the potential to greatly increase efficient and electric offerings over the next decade.

This year’s Greenest List features the most environmentally friendly cars for model year 2022. Each car receives a Green Score based on an environmental damage index, which reflects the cost to human health from air pollution associated with vehicle manufacturing and disposal, the production and distribution of fuel or electricity, and vehicle tailpipes. ACEEE evaluated more than 1,000 models, including vehicles fueled entirely by gasoline or diesel (including hybrids), plug-in hybrids powered by energy both from gasoline and electricity from plugging into the grid, and all-electric vehicles.

While the rise in the number of hybrids on this year’s Greenest List occurred in part because of the shift to heavier EVs, it also resulted from updates to the scoring methodology. Based on periodically updated estimates from the federal government, GreenerCars considers the emissions from producing a vehicle’s materials. For model year 2022, the federal estimate showed an increase in the emissions associated with mining lithium, a crucial mineral used in EV batteries.

No pure internal combustion engine vehicles made the Greenest List. Yet the list does include five gasoline hybrids, which combine a small gasoline engine with an efficient electric motor (and capture the energy from braking in the battery) to improve the vehicle’s overall efficiency. This is a good indication that even a small degree of electrification can greatly improve fuel economy.

GreenerCars.org identifies practical options in each vehicle class for widely available automatic transmission gasoline-powered models. The Greener Choices List includes conventional vehicles and traditional hybrids that are available in all 50 U.S. states but excludes plug-in hybrids and all-electric or pure battery EVs given the limited availability of charging stations.

This year’s list has many familiar faces, with hybrids taking seven of the dozen spots again. One vehicle, the Toyota Corolla Hybrid, also makes our Greenest List, while another three are different versions of models among our greenest scorers.

GreenerCars.org also provides a Meanest List, as usual made up this year of gasoline-fueled large SUVs, pickup trucks, and European luxury cars that are the least friendly to the environment. The RAM 1500 TRX 4x4 takes the first (“meanest”) position again this year, with the rest of the list mostly populated by regulars from prior years. 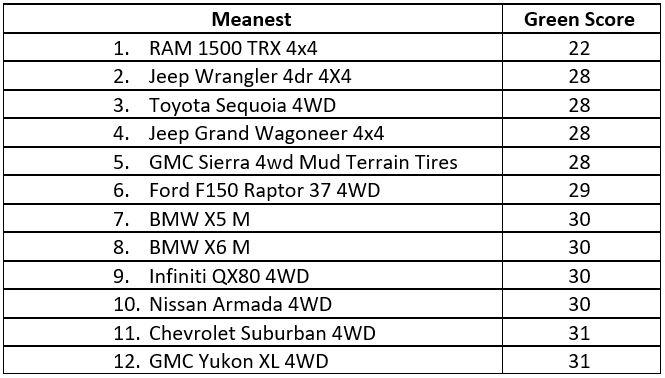 Note: The GMC Sierra and Chevrolet Silverado are nearly identical and therefore only one is included on the Meanest List.

Green Scores of the model year 2022 vehicles are available in the GreenerCars.org interactive database, along with each configuration’s fuel economy, health-related pollution impacts, and greenhouse gas emissions. Visitors can also turn to GreenerCars scores to determine eligibility for parking benefits at participating LEED-certified buildings.

In addition to ACEEE’s 2022 Market Trends analysis, also released today, GreenerCars.org features shopping advice and a consumer primer on vehicles and the environment. To learn about the efforts of U.S. states to increase EV adoption, check out ACEEE’s State Transportation Electrification Scorecard, published in 2021. 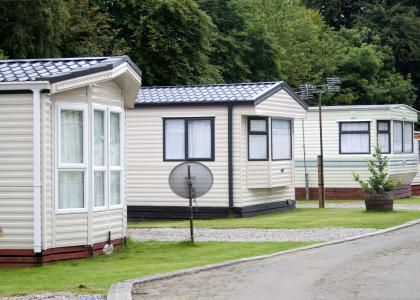 Press Release
Biden’s Efficiency Proposal for Manufactured Homes Must be Strengthened
August 19, 2021
Fact Sheet
Proposed Federal Programs to Support the Decarbonization of Industry
This set of fact sheets lays out recommendations for how Congress could authorize a set of new and expanded federal programs to support the ...
April 14, 2021