Will Congress score a touchdown or drop the ball on energy efficiency?

We thought it was time to look at the stats. As we have in other years, we estimated the likely impacts of 15 proposed energy efficiency policies here. Since the House and Senate bills are moving targets, we combined the policies into three packages: the first down package with provisions that have received wide support, a more aggressive touchdown package, and a fumble package of provisions that drop the ball. Some of the impacts are shown in the figure below. 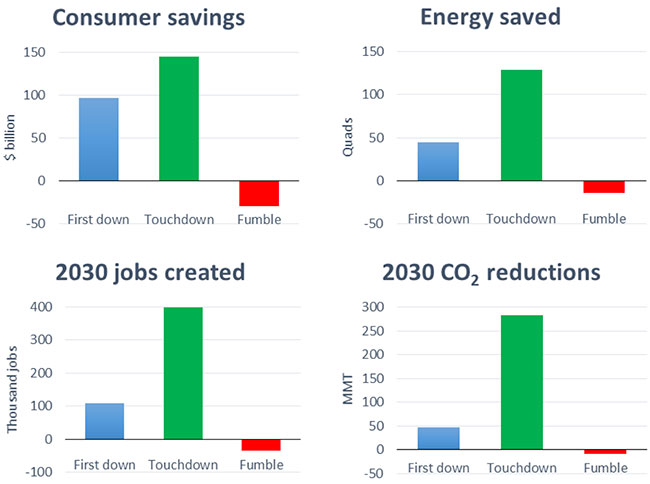 The first down package includes several provisions in the Senate bill and a few that should be added. It would really move the ball down the field. More specifically, it would:

More than half the savings are from a provision promoting better building energy codes from the Portman-Shaheen bill. Other notable provisions in the Senate bill include one on smart buildings from Senator Cantwell, and part of a bill on smart manufacturing from Senators Shaheen and Alexander—these would encourage faster deployment of new control technologies. Notable among provisions not yet in the Senate bill are the SAVE Act from Senators Bennet and Isakson on energy efficiency in mortgage underwriting, as well as the E-Access Act on consumer access to utility bill information from Senator Markey. These would be important additions to the team.

In contrast, the fumble package includes measures under consideration that would lose yardage from current energy efficiency efforts, including a provision that would limit assistance to states on building energy codes (Blackburn-Schrader) and bills that would block important efficiency standards for furnaces and for ceiling fans—and perhaps threaten the billions in consumer savings from the broader appliance efficiency standards program. This package would cost consumers $35 billion over time and result in 35,000 fewer jobs in 2030. That’s not a smart play.

The current House bill is not close to either of those packages. It only includes one relatively small, though positive, provision we analyzed that would strengthen Industrial Assessment Centers (it also is in the Senate bill). We hope they’ll be able to put some more points on the board as play goes on.

Finally, to show how far a long drive could take us, we analyzed a more comprehensive policy, a federal “energy efficiency resource standard” in a bill by Senator Franken. It would set minimum savings levels for electric and natural gas utility efficiency programs nationwide. We called it the touchdown package because it would change the game: almost $150 billion in net consumer savings, 400,000 more jobs in 2030, and 280 million metric tons lower carbon dioxide emissions in that year.

Like football, legislation can be a rough sport, and any season will have its highlight reel and its blooper reel. We hope that Congress won’t drop the ball, but will instead score some big wins this year with effective energy efficiency legislation—wins for consumers, the economy, and the environment.

Blog Post
Putting a Price on Carbon Is Not Easy; Energy Efficiency Can Help
September 26, 2019