Washington, DC—More U.S. states have adopted or advanced new energy-saving targets and vehicle and appliance rules, but COVID-19 slowed other efficiency efforts, according to the 2020 State Energy Efficiency Scorecard released Wednesday. For the first time in four years, California took first place nationwide, edging out Massachusetts, the leader in the Northeast. Other regional leaders include Minnesota in the Midwest, Colorado in the Southwest, and Virginia in the South.

The 50-state scorecard (which also includes Washington, DC) from the American Council for an Energy-Efficient Economy (ACEEE) found that states, many of which have set ambitious climate goals since 2018, had to abruptly shift their focus this year to mitigate the health and economic impacts of the deadly global pandemic. Across the country, energy efficiency workers lost jobs—with an estimated more than 300,000 still unemployed—pointing to the need for policymakers to help get them back to work.

Register for the Webinar

While some efficiency efforts stalled, others advanced before or during the pandemic. In top-ranked California, for example, utility regulators in January approved $45 million in incentives for high-efficiency heat pump water heaters, a crucial technology for reducing greenhouse gas emissions. In September, Governor Gavin Newsom issued an executive order calling for the phase-out of new gasoline-powered vehicles by 2035. 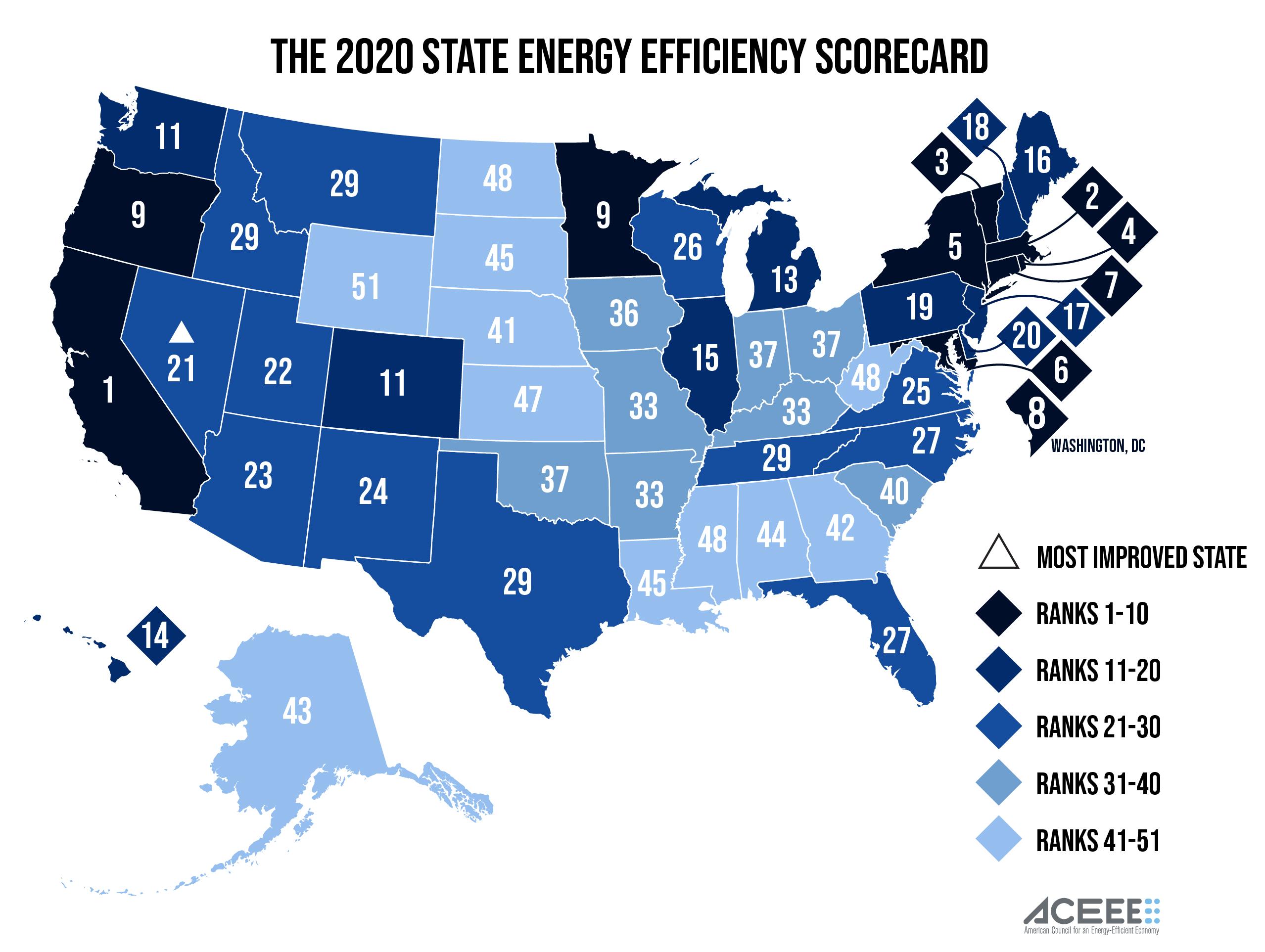 “A number of states see that they have to act aggressively now to cut carbon emissions, but others just aren’t acting urgently. We need to see more states follow the leaders here, and quickly. Aggressive state policies combatting climate change are absolutely necessary no matter what gets done in Washington,” said Steven Nadel, ACEEE executive director. “In this pandemic and recession, policymakers can embrace efficiency efforts to help residents reduce their utility bills and to get more people back to work, all while cutting pollution.”

The report, which examines policies and programs adopted through July, scores states on 32 metrics in five areas. No state earned all 50 possible points (California got 43), showing that each has considerable room for improvement. For the first time, the report highlights top scorers regionally:

In contrast, Iowa (#36) fell the farthest in the rankings, losing 13 places. Its slide occurred primarily as a result of 2018 legislation that capped certain efficiency investments, leading to a steep decline in progress in reducing electricity and gas use.

In each region, the report identifies a “state to watch,” where promising developments are emerging. Along with Virginia, New Jersey (#17) is the most recent to adopt specific energy-saving targets for utilities, and regulators there are seeking to ensure that low-income customers have equitable access to energy efficiency programs. Michigan (#13) regulators recently approved utilities’ plans to expand efficiency programs, North Carolina (#27) is advancing opportunities to strengthen programs, and Arizona (#23) regulators recently approved a path toward 100% carbon-free electricity, including an extension and expansion of the state’s energy efficiency goals. Washington (#11) is working to implement 2019 laws requiring 100% clean energy by 2045 and a first-of-its-kind statewide standard for reducing energy use in existing large commercial buildings. 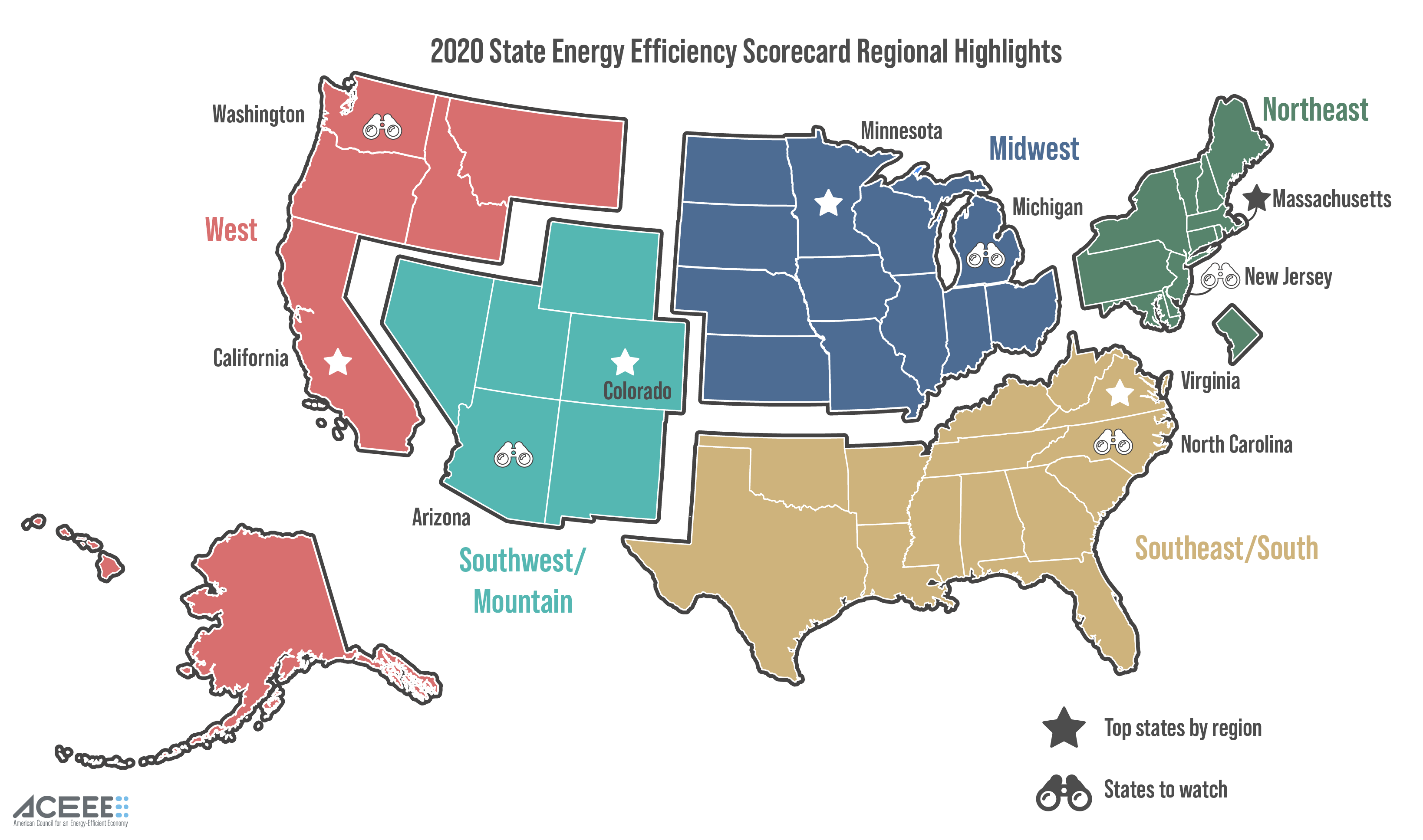 California Governor Gavin Newsom said: "Energy efficiency has been a foundational part of California’s environmental efforts for the last four decades. Choosing to embrace a smarter way of using energy will save people and businesses money, and by leaning into energy efficient policies we will drive new technologies, creating the economy of the future.  That’s why I’m proud that California is receiving this top honor from ACEEE, recognizing not only the state’s national leadership but also the ongoing role energy efficiency continues to play as a key pillar in our economic health and our fight against the climate crisis. Good climate sense is good economic sense."

Colorado Governor Jared Polis said: “My administration is dedicated to achieving 100% renewable energy by 2040, reducing air pollution, and taking bold climate action across our economy. This work will protect the health and well-being of our residents and also generate enormous economic and job growth opportunities. We’ve made significant progress in meeting our goals, and continue to leverage our lowest cost resource—energy efficiency—to modernize the way we heat and power our homes and travel across the state.”

Nevada Governor Steve Sisolak said: “I’m proud to see Nevada leading the way on energy efficiency—an important part of what we can do to reduce greenhouse gas emissions. I look forward to continuing our climate action progress in this arena and helping consumers save money on their energy bills.”

ACEEE found that a number of states have made efforts to foster equity in efficiency policies and programs. For example, multiple states, including California, New Jersey, and Oregon, have taken steps to expand programs for and better meet the needs of customers with lower incomes. Still, states can do much more to ensure that policy and program outcomes are equitable.

The report examined energy efficiency policies across five primary areas, identifying states that have adopted best practices in each, as well as opportunities ahead:

The scorecard, now in its 14th edition, is based on data collected from states, utilities, and numerous publicly available sources. Government staff members from all 50 states and Washington, DC, were given the opportunity to comment on a preliminary draft of the findings. 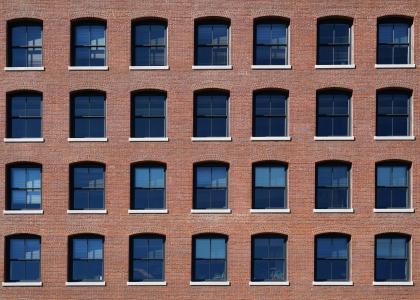 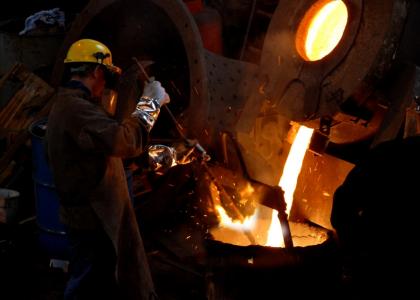