The Trump administration will soon release a proposed rule on light bulb standards. The details are under wraps, but manufacturers have lobbied for an illegal rollback of strong standards with which they must comply beginning in 2020. Our new issue brief shows what’s at stake.

Few energy efficiency success stories are bigger than the national light bulb standards. Enacted by the US Congress and President Bush in 2007, they are delivering huge savings for consumers and the environment. They helped spur the investments and market changes that have resulted in the low-cost, high-quality LEDs (light emitting diodes) that are now widely available.

Initial standards, which we refer to as stage 1, started taking effect in 2012. Last year, the US Department of Energy (DOE) widened the range of light bulbs that must comply with tougher standards (stage 2), slated for 2020. These 2020 standards will expand the LED market and further reduce costs for consumers, ensuring affordable LEDs will be widely available for all types of bulbs commonly used in US homes.

We estimate that US light bulb standards will save consumers more than $5 billion on electricity bills this year alone. After 2020, when manufacturers and retailers must comply with stage 2, annual consumer bill savings will grow, reaching about $22 billion in 2025 (about $180 for an average household). Total electricity savings will top 140 billion kilowatt hours in 2025 —approximately the amount generated by 45 large coal-fired power plants or 25,000 wind turbines in a year. By reducing the amount of fuel burned for electricity, the standards cut harmful emissions such as smog-forming nitrogen oxides (NOX), sulfur dioxide (SO2), and globe-warming carbon dioxide (CO2). The result? Cleaner air and fewer respiratory problems such as childhood asthma attacks. 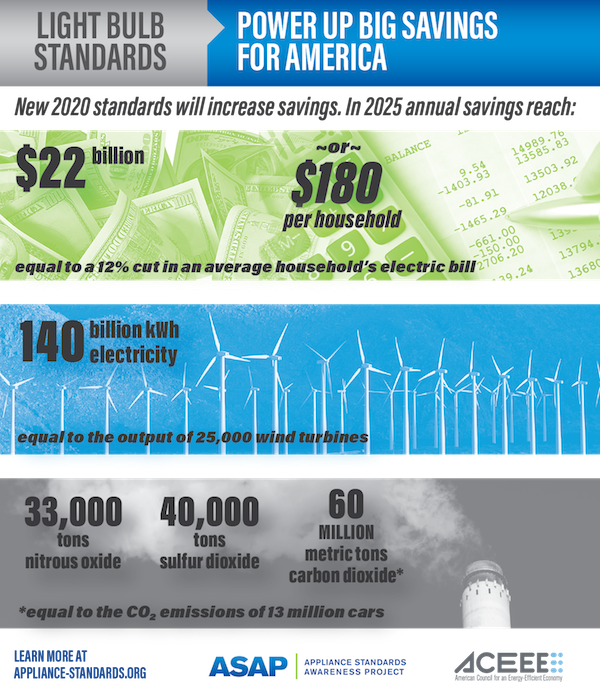 The broader economy also benefits. In a report released last week, ACEEE and ASAP estimate that the light bulb standards will create or sustain 115,000 additional US jobs in 2025.

But the rollback sought by manufacturers would potentially eliminate all savings from the 2020 standards, slowing the transition to energy-efficient lighting and hurting consumers and the economy. The average household would lose $115 per year in electricity bill savings in 2025, the portion delivered by the stage 2 standards. As the figure below shows, on a national, cumulative basis, consumers would lose more than $340 billion in bill savings by 2050. Millions of tons of pollutants would be needlessly added to the atmosphere. 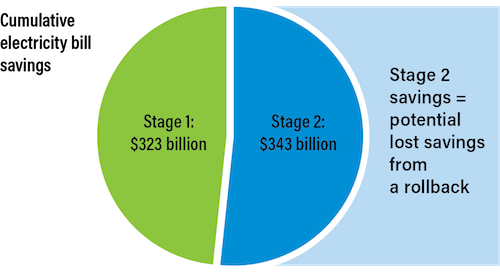 Whether a rollback attempt succeeds will likely depend on a set of legal issues. The law triggered an automatic “backstop” standard for stage 2 when DOE failed to comply with legal deadlines. In addition, DOE’s likely inability to meet the minimum savings threshold set by Congress will also trigger the automatic stage 2 standards. But manufacturers see it differently, arguing that the backstop standard has not been triggered. In the soon-to-be-released proposed rule, we will learn what the Trump administration plans.

Because the national appliance standards law forbids a weakening of the standards, either by lowering them or narrowing the range of products covered, any attempt to roll back the 2020 standards will almost assuredly lead to lawsuits. The law also permits states to step in to enforce these standards. With such enormous energy and economic benefits at stake, the effort to protect the 2020 standards will be a top priority.

To learn more about this topic check out the full issue brief and the online appendices. 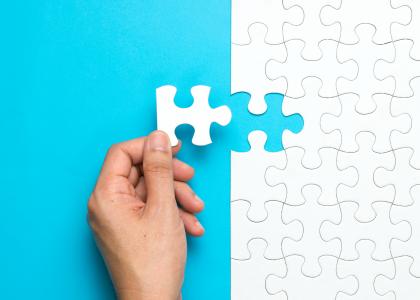 Lifting the Cap: Estimating the Economic Impacts of Energy Efficiency Investments in...

This paper analyzes the job-creation impacts of increased energy efficiency investments by electric distribution utilities in the Commonwealth of ...
April 2, 2019
Fact Sheet
Proposed Federal Programs to Support the Decarbonization of Industry
This set of fact sheets lays out recommendations for how Congress could authorize a set of new and expanded federal programs to support the ...
April 14, 2021
© 2021 All rights reserved.