Fuel economy is going up. Vehicle prices are holding steady.

n responding to an Environmental Protection Agency (EPA) action on vehicle standards, ACEEE found that average vehicle prices have remained essentially flat over the past 15 years, even as average fuel economy improves. The finding rebuts multiple claims from the auto industry that boosting vehicle fuel economy makes cars and trucks unaffordable for American consumers. Our analysis is once again relevant as federal agencies, acting on the Trump administration’s decision to review fuel economy standards, have resumed evaluating the appropriateness and feasibility of existing regulations and greenhouse gas emission requirements of cars and light trucks. Our finding complements the agencies’ 2016 technical report, which found that savings at the pump from better fuel economy would far offset the cost of the technologies needed to meet the standards. Bottom line: Consumers are saving money, and affordable vehicle choices remain.

Fuel economy naysayers have seized on vehicle price trends, often ignoring essential features of the data. The Alliance of Automobile Manufacturers, which pushed the Trump administration to reopen the standards, has claimed repeatedly that the average car today costs 60% more than the average car in the early 1990s, driven partly by the standards. Among recent industry comments to the EPA, Global Automakers claims that prices “continue to climb,” and that further increases will jeopardize new vehicle sales, pricing some out of the new vehicle market entirely. The Heritage Foundation, a conservative policy think tank, asserts that fuel economy regulations increased the cost to purchase a model year 2016 vehicle by at least $3,800 and that future standards will put new cars out of reach of millions of lower-income households.

But after nearly a decade of growth since the recession and back-to-back years of all-time record sales, the claim that Americans are being priced out of the market warrants a closer look. The Bureau of Economic Analysis (BEA) has collected data on consumer expenditures for new cars going back to 1967 and for new light trucks since 2002. We use the consumer price index to adjust the BEA data for inflation, leading to the information presented in the figure below. Outside of the Great Recession, the average price of vehicles purchased by consumers in real dollars has in fact remained nearly flat since 2002. 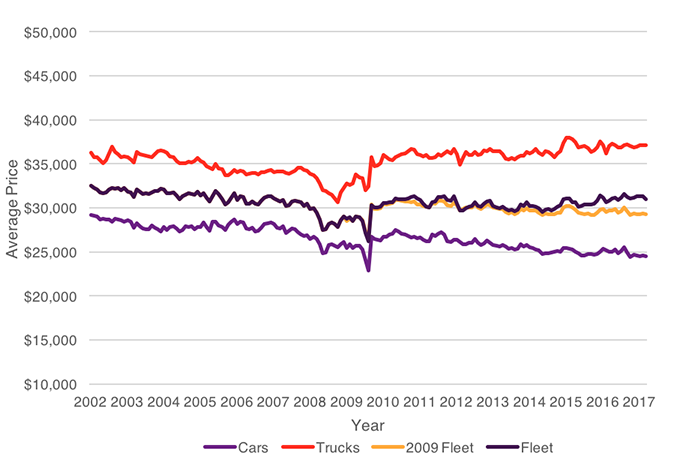 The average price paid for new vehicles reflects many factors, but consumer preference for better-equipped vehicles and longer loan terms that decrease monthly payments are two of the primary drivers. The price dip during the recession reflects fewer sales of expensive cars and trucks in favor of more modest vehicles. The effect on average prices of 2009’s federal “Cash for Clunkers” rebate program is also apparent, where average expenditure dropped with the generous rebate. More recently, consumers are buying more trucks instead of cars, and trucks are typically more expensive than cars. If Americans had continued to buy the same mix of cars and trucks as they did in 2009, the average vehicle purchase price of the entire light-duty fleet (represented by the orange line) would have been roughly $1,900 lower during the first months of 2017 than it was. In fact, average vehicle price could have been at its lowest point, outside of the recession, since BEA began tracking truck prices in 2002.

For cars alone, prices have been on a downward trajectory since 1998, well before the recession or the increase in fuel economy requirements. The claim by the Alliance of Automobile Manufacturers that car prices have increased by 60% since the 1990s just doesn’t hold up — unless you ignore inflation and prevalent consumer incentives offered by automakers. The figure below shows that, in real dollars, the average price for a car “out the door” (what people actually pay, including rebates and fees) is 16% lower today than in the early 1990s. 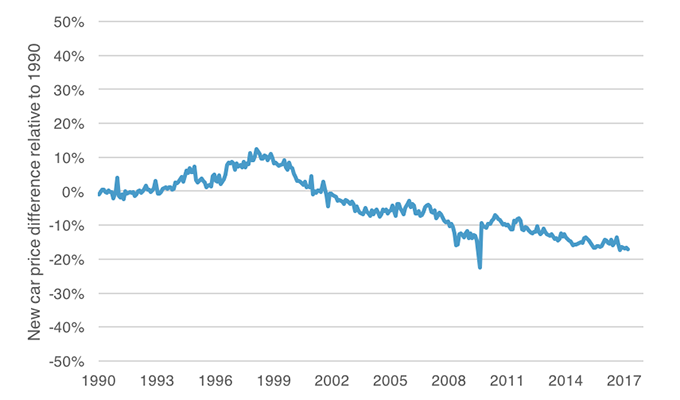 For trucks, the data show that the average transaction price has increased by about 7% from pre-recession levels. Many consumers are choosing to buy vehicles that simply didn’t exist a decade ago, such as $67,000 luxury pickup trucks with massaging seats and Wi-Fi, which further inflates the average price of trucks.

The auto industry has a history of crying wolf when required to make changes that  preserve our health, wealth, and safety. While new technology costs money, such costs are typically lower than predicted and, in addition, come down over time as the technology matures. There simply has been no vast increase in the average price of new vehicles, and affordable options remain. The industry continues to produce new vehicles that are safer, cleaner, and more fuel efficient, and with an extensive array of new comfort and entertainment features. Even though high truck sales are slowing gains in average fuel economy, new vehicle buyers — even those buying trucks — are saving money thanks to the standards. 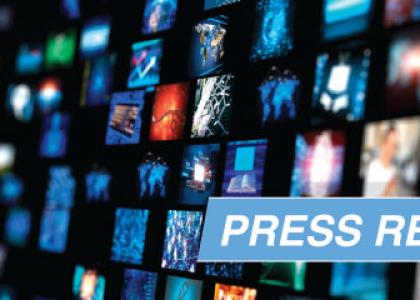