Energy Efficiency Employs At Least 2.4 Million Americans. Many Of Those Jobs Are Now At Risk.

Before the COVID-19 pandemic upended the economy, the energy sector was an engine for U.S. job growth. A new report today shows that energy efficiency produced the most new jobs within that sector — more than 54,000 last year alone — and directly supported at least 2.38 million jobs. Now that much of that work is suspended, restoring and increasing those jobs will be critical as U.S. policymakers consider ways to shore up the economy.

The annual report highlights what was the growing demand for workers to make and install energy-efficient products as well as build energy-saving vehicles, homes, and buildings. As a rising number of Americans file for unemployment because of COVID-19 impacts, contractors nationwide who install efficient products in homes are being furloughed, and factories that make electric cars and efficient products are shutting down.

“The role of energy efficiency, both in the built environment and in transportation, cannot be overstated as a contributor to job growth,” says the fact sheet for the 2020 U.S. Energy and Employment Report, produced by the National Association of State Energy Officials and the Energy Futures Initiative (EFI), a nonprofit think tank. The report says energy efficiency and fuel efficiency contributed to more than 400,000 new U.S. jobs in the last five years.

“Energy investment is a winning formula to respond to any recession,” said EFI leader and former U.S. Secretary of Energy Ernest J. Moniz in releasing the fifth annual jobs report. “We are now producing more energy, more cheaply than ever before and are using it more efficiently.”

The report, first published in 2015 by the U.S. Department of Energy, says the energy sector employed 6.8 million Americans last year and produced new jobs — 120,300 last year alone — at double the rate of the economy as a whole since 2015.

Energy efficiency has been a leader. It increased jobs last year at a rate of 2.3% and employed more workers than the coal, oil, gas, and renewable energy industries combined.

Direct efficiency jobs are just part of the total

The report says 2,378,893 Americans spent some or all of their time last year working with energy-efficient technologies and services. About a third of them — more than 826,000 — were directly involved in the manufacture, installation, design, wholesale distribution or other services of ENERGY STAR®-certified products. 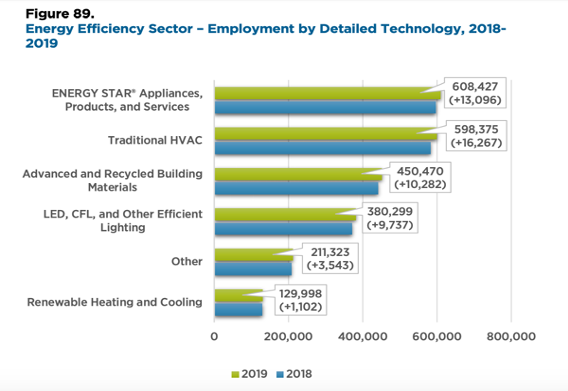 Slightly more than half of efficiency jobs, or 1.32 million, are in construction, where workers install efficient insulation, windows, lighting, and heating and cooling equipment. Others are in manufacturing, wholesale trade as well as professional and business services. 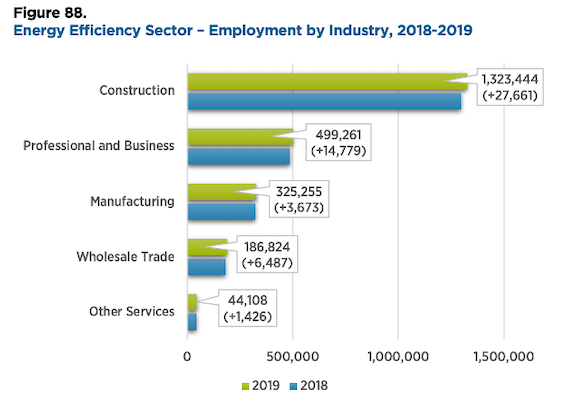 This year’s report offers data that show, by technology application, the steady increase in energy efficiency jobs since 2015. The biggest increases have come in traditional HVAC (heating, ventilation, and air conditioning) and in ENERGY STAR appliances. 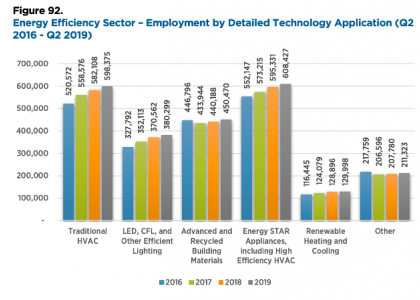 In addition to the 2.38 million efficiency jobs, the report directly ties another 0.76 million jobs to vehicle fuel economy and alternative fuel vehicles. Approximately 266,300 Americans worked last year with alternative fuel vehicles, including hybrids, plug-in hybrids as well as all-electric and fuel-cell/hydrogen vehicles. Another 494,000 made components that contribute to fuel economy.

For the first time, the 2020 report also includes the number of employees — 20,700 — who worked directly for utilities last year on administering residential, commercial, and industrial energy efficiency programs.

The report, citing data from the U.S. Bureau of Labor Statistics, notes that about 4.1 million Americans held jobs last year in retail industries that sell and distribute ENERGY STAR appliances and building materials along with other products. It doesn’t include indirect jobs that result when customers spend or invest the money they save in lower energy bills somewhere else in the economy.

Prior to the COVID-19 pandemic, energy efficiency employers projected their 2020 employment would expand 3% or nearly 71,000 new jobs. With such projected growth, many employers expected difficulty in finding qualified workers. About 91% of construction employers reported that it was somewhat difficult or very difficult to hire new employees in 2019 although that picture will likely look quite different today.

We don’t yet know the COVID-19 pandemic’s full impacts on energy efficiency jobs. Many worksites have to come to a halt to prevent the spread of the virus, and the ability to pay for efficiency services is likely to decrease as the economy falters. But we do know how many Americans count on energy efficiency work. When it is time to rebuild the economy, efficiency can provide millions of jobs while helping consumers and fighting climate change at the same time. 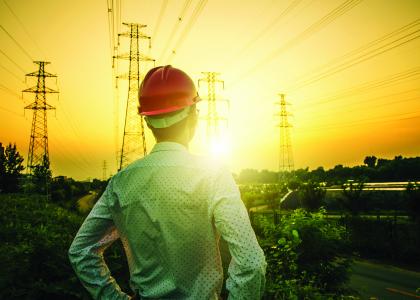