Large water-cooled chillers are the "engines" of the air-conditioning systems for almost all large buildings. Prior to 1993 the vast majority of chillers used CFC-11 and CFC-12 refrigerants which have been banned for new installations because their breakdown products attack the ozone layer. Although 2/3 of these obsolete and inefficient chillers have been replaced, some 30,000 remain in both public and private facilities across the country. Replacing them will allow for the recovery of 37 million pounds of ozone depleting CFCs which equates to 64 MMT of CO2eq. The minimum 61% improvement in chiller efficiency which would be achieved by replacing these old systems would save 17.2 MMT of CO2/yr from reduced electricity consumption. To put that number in context, it is equivalent to taking 3.3 million cars off the road or avoiding the need for about seven new 400 MW coal-fired power plants. This improvement would also reduce HVAC energy use in participating buildings by at least 20%.

CFC chiller replacement is cost-effective, but the high initial costs mean that many building owners do not make these investments. Moderate incentives would improve the economics and reduce the upfront cost, substantially increasing the number of systems replaced. AHRI estimates that the cost of replacing the average large chiller is $470/ton, inclusive of labor to remove the obsolete unit and install the new one. The average chiller to be replaced has a capacity estimated at a weighted average of 411 tons of cooling.

Virtually all replacement chillers sold in North America are also manufactured in North America. Major plants are located in Pennsylvania, Wisconsin, Texas, Virginia, Colorado and North Carolina. If all CFC chillers are replaced, AHRI estimates that approximately 10,500 jobs may be directly created or preserved in the manufacturing, removal and installation of new chillers, with additional jobs being created by the engineering services required to take advantage of these incentives. ACEEE estimates that when indirect and induced jobs are included, approximately 60,000 jobs are provided.

Enabling these chillers to be changed out quickly will facilitate substantial economic benefits, greater energy efficiency and environmental protection. To achieve this end the Air-Conditioning, Heating and Refrigeration Institute (AHRI) and the American Council for an Energy-Efficient Economy (ACEEE) have led a task force to create a consensus proposal which would promote a more rapid change out of CFC based chillers.

We propose that a tax credit be offered for removing from service any chiller using CFC refrigerant and replacing it with a chiller meeting the efficiency levels set by ASHRAE standard 90.1-2010. This credit should be in place for three years from date of enactment. A tax credit of $200/ton, based on the tonnage of the CFC unit being replaced, would be an appropriate incentive for a consumer to absorb the significant cost associated with the purchase of a new chiller and the removal of the old system. An additional incremental incentive of $100 per ton for chiller downsizing would be added. This additional incentive could only be accessed if, during installation, all chilled water distribution pumps were upgraded to variable frequency drives. Non-taxpaying entities which are eligible for the credit could transfer the credit to the seller, in a transparent manner, which would allow for an up-front price reduction for the consumer. This is important as AHRI estimates that as many as half of the CFC chillers in operation are in buildings owned by non-taxpaying entities. 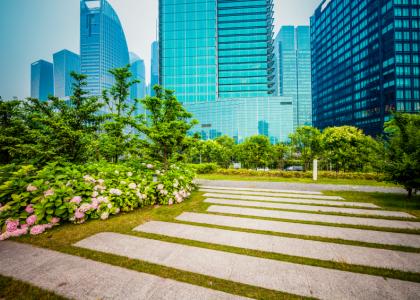