Automakers are rolling out an impressive suite of fuel-saving technologies just as the US Department of Transportation (DOT) and US Environmental Protection Agency (EPA) seek to roll back vehicle efficiency and emissions standards. Many of these technologies will be applied to full-size pickups, the perennial poster child for going easy on domestic manufacturers when it comes to setting future fuel economy (CAFE) and greenhouse gas emission (GHG) standards. Let’s take a look at how the Detroit Three’s pickups might fare relative to the standards already on the books — starting with an unexpected rising star.

RAM is the first domestic automaker to offer a 48-volt mild hybrid system, making it a standard feature on the entry-level V6 engine and an option on its V8. Mild hybrids use a relatively small battery and belt-driven motor-generator, making the system simpler and cheaper than a traditional hybrid. Mild hybrids boost fuel economy (more than 2 MPG on the V8) while providing additional torque, a perk most pickup buyers are bound to appreciate.  Because mild hybrids avoid the cost and complexity of a traditional hybrid, these systems could become standard equipment in many more vehicles down the road. The 2019 RAM includes other notable technology such as active aerodynamics that further improve fuel economy. Aerodynamics alone will contribute a fuel economy improvement of one full MPG.

So far, only a few of the 2019 models have been EPA certified, so to project how far these new trucks will go on a gallon of gas, we turn to estimates provided by the manufacturers or their parts suppliers, along with a healthy dose of engineering judgment. To see how these trucks might fare, we estimated fuel economy for one of the most popular configurations – a crew cab with standard 5’7” box for each available RAM engine.

When equipped with the base mild hybrid V6, the 2019 RAM will far exceed its 2019 laboratory fuel economy target of 25.3 MPG – equivalent to about 20.2 MPG in real-world driving. Moreover, taking into account various technology credits available under the CAFE program, which can substantially facilitate manufacturer compliance and are widely used by the industry, the truck could exceed its targets for the next several years – through model year 2023 by our estimates (figure 1). That’s right – despite claims by automakers and the current administration that future fuel economy standards are too hard, by the end of this year you’ll be able to buy a popular, no-compromise, domestic pickup that meets its future fuel economy target four years early. Plus, the truck has more power and greater towing and payload capabilities than the one it replaces. The same is true of other RAM models. 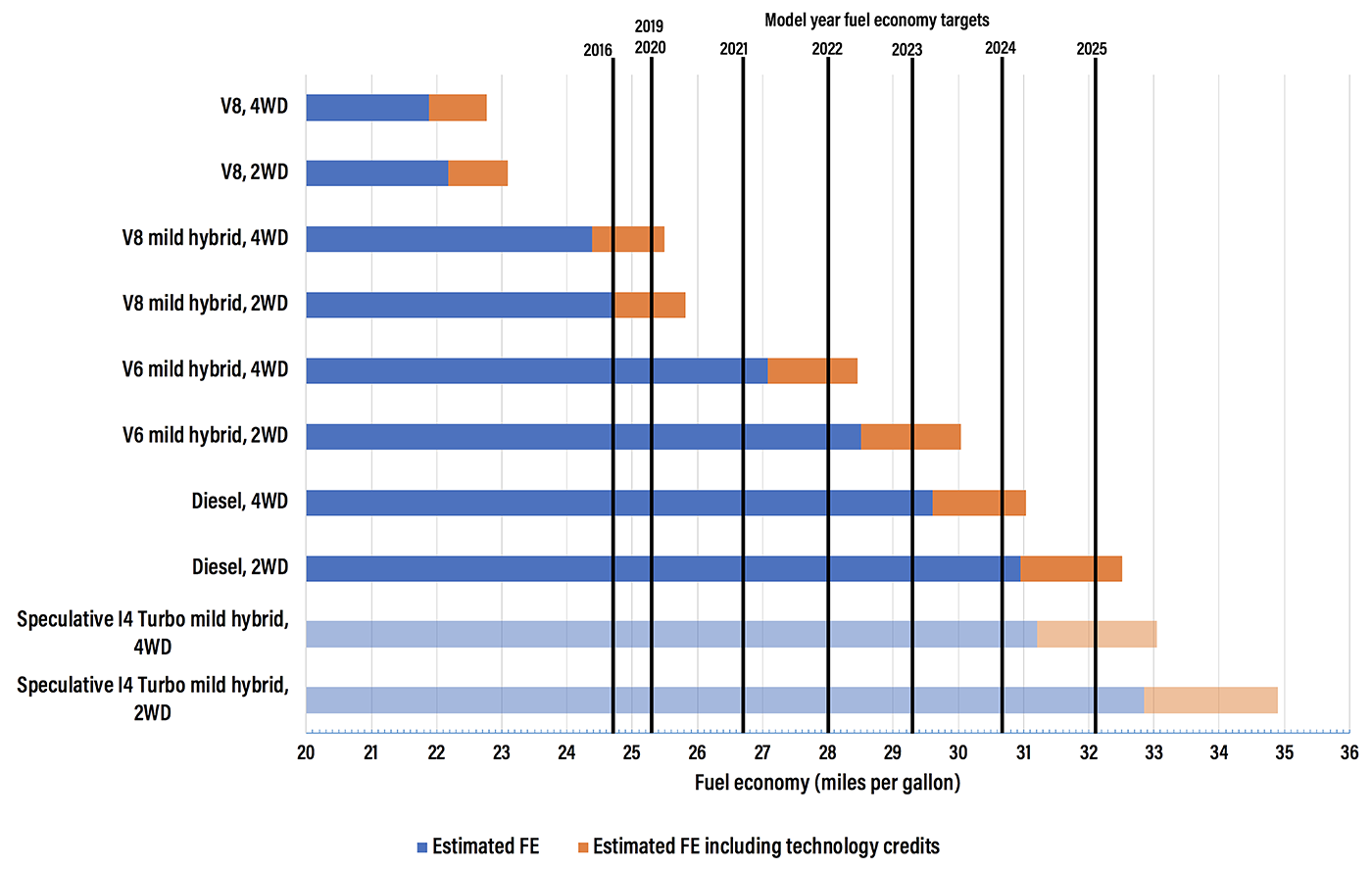 Crew Cab with standard (5’7”) bed; I4 Turbo mild hybrid is speculative with no manufacturer statement of availability

FCA will offer a diesel option in the 2019 RAM with a boost in MPG. The VW emissions cheating scandal has had major repercussions for diesel — including an EPA civil complaint that the RAM 1500 and Jeep Grand Cherokee diesels contained illegal “defeat devices” in model years 2014-2016. EPA gave FCA the go-ahead to sell diesels again starting in model year 2017, however. We estimate that 2019 diesel RAM trucks, regardless of cab style or two- or four-wheel-drive, will exceed their model year 2025 fuel economy target by nearly half a mile per gallon.

Plus, we’re betting that RAM will eventually adopt the new 2.0-liter inline four (I4) cylinder turbocharged mild hybrid engine that Jeep debuted on its redesigned 2018 Wrangler. The engine is even more powerful and more efficient than the outgoing RAM’s standard V6. We estimate that a RAM truck equipped with this turbocharged I4 would easily surpass its model year 2025 fuel economy target of 32.1 MPG (about 25.7 MPG in real-world driving). Though RAM will offer its less-efficient V8 both with and without the mild hybrid option in 2019, we suspect consumers will prefer the more-efficient powertrain options, much as they did in the case of Ford’s EcoBoost F-150 engines.

A race for fuel efficiency dominance

As RAM fuel economy takes off, its competitors won’t sit idle. GM and Ford are also gearing up for hybrid powertrains on their pickups. GM is already selling its optional mild hybrid eAssist system with the 5.3-liter V8, contributing to a 12% improvement in fuel economy, while Ford has teased a full hybrid F-150 by 2020. Both manufacturers will offer a diesel powertrain option within the next year or two, promising an EPA-rated highway fuel economy of at least 30 MPG in certain configurations. Ford also recently updated the Ecoboost engine for 2018 that helped to increase F-150 fuel economy by up to 2 MPG – more than enough to meet increasingly stringent fuel economy targets in the near term.

GM has completely redesigned its Chevrolet Silverado and GMC Sierra full-size trucks for 2019, and our preliminary analysis shows that GM is a serious contender in the emerging pickup fuel economy battle. Some of the best-selling trims will come standard with the first turbocharged I4 in the segment, which will significantly improve fuel economy while also offering more power and torque than the 4.3-liter V6 it replaces.

Where does that leave us?

Despite complaints that vehicle standards are too tough, manufacturers are proving that their most utility-driven and most-profitable products, sold to their most-demanding customers, can meet those very standards years early. Innovative engine improvements, combined with other fuel-saving technologies such as lightweight materials, leave little doubt that a big – if not historic – jump in pickup fuel economy is coming over the next few years. The new technologies won’t be free, but most buyers ultimately will more than offset those costs by spending less at the pump. Pickup buyers have a lot to look forward to – largely thanks to effective fuel economy standards.

The electric power sector is undergoing rapid transformation, in part because of the increased use of technologies that can be located closer to the ...
May 2, 2019
© 2021 All rights reserved.