US electricity use is no longer growing

For many years, electricity use in the United States increased steadily, in lock-step with growth in the economy as measured by Gross Domestic Product (GDP). But since 2010, electricity consumption has been essentially flat, even as GDP has risen steadily. The earlier trend and the divergence are shown in the graph below. New figures just released by the Energy Information Administration (EIA) show that electricity use in 2015 was nearly identical to use in 2010, even as the economy grew 11%.

Many analysts, including EIA and ACEEE, are attributing the change in part to energy efficiency, including federal and state product efficiency standards, state and local building codes, and efficiency programs operated by utilities and others. Annual differences in weather and changes in the structure of the economy (e.g., more services, less heavy manufacturing) probably also play a role. Also, it should be noted that there are regional differences. In recent years, electricity use has generally declined a little in the Northeast and grown somewhat in the South; other regions have tended to be stable.

US electricity consumption and GDP over a 20-year period 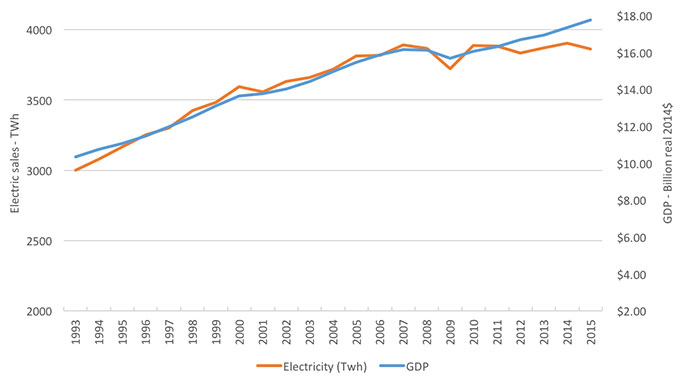 While crystal balls are murky, there is a good chance this trend will continue as many factors are driving use down and only a few factors are driving it up. Factors pushing use down include continued energy efficiency efforts, continued changes in the economy, reduced space heating use due to gradually warming weather and southward population shifts, and likely continued growth in solar and other distributed generation (the graph only includes power used and sold by utilities). Factors that could drive electricity use up include growth in electric vehicles, rising air conditioning use due to warmer weather and southward population shifts, and installation of air conditioning in more northern homes.

Flat electricity growth has important implications for utility system planning. It means that new generation is only needed to replace retiring plants or to replace existing but more expensive plants, allowing the more expensive plants to operate less or even retire. It also means that utility revenues increase only to the extent that rates go up or utilities identify new value-added services to sell. The days when utilities can expect to grow by increasing sales may be over. 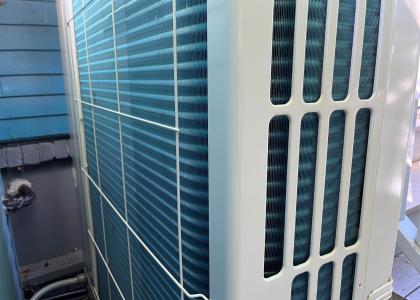 Press Release
Analysis: Electric Heat Pumps Offer Cheapest Clean Heating Option for Most U.S. Houses
July 27, 2022
Fact Sheet
Efficiency Requirements for New Federally Financed Homes Will Create Jobs and Cut...
ACEEE published an updated and expanded analysis on this subject in May 2022. Please refer to that publication. Although building energy codes are set ...
June 24, 2021
Policy Brief
State Policies and Rules to Enable Beneficial Electrification in Buildings through Fuel...
To meet ambitious emissions-reduction goals, a small but growing number of states are promoting electrification of space and water heating as an ...
July 21, 2022
© 2022 All rights reserved.