Energy use per person can vary widely with income level, geography, climate, and demographics. The graph shows energy use per capita in all the economic sectors in the United States in recent years. The decrease is mostly due to reduction in residential energy consumption in recent years.

Commercial buildings include office, retail, education, storage, services, food sales, religious worship, and healthcare buildings. While these range widely in their energy consumption, heating, lighting, and cooling take close to half of the energy consumed by all commercial buildings. We express energy efficiency in these buildings as energy used per unit of floor area (called energy use intensity or EUI). We can report EUI either for primary or delivered energy as discussed above for residential buildings. 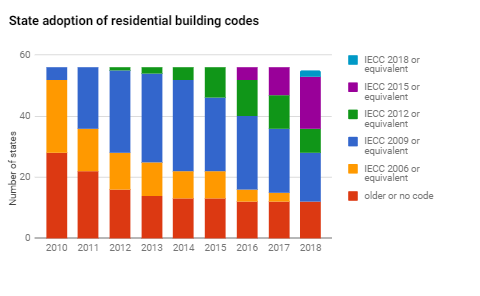 Model energy codes establish the minimum energy standards for the design and construction of new buildings. Thus they facilitate and standardize building energy efficiency practices. From 1992 through 2012, these codes saved over $44 billion dollars in energy costs through the avoided use of 4 quads of energy. A quad is a quadrillion British thermal units (Btu). By way of comparison, 4 quads is more than all the energy consumed by Poland in 2015. Energy codes are set by states and sometimes local governments based on model codes from ASHRAE and the IECC, and are revised periodically. The graphs show an increasing number of US states with updated state-level building codes for residential and commercial buildings.

Efficiency performance standards for appliances, equipment, and lighting are expected to save the United States a total of 71 quads of primary energy cumulatively by 2020. In comparison, the United States consumed about 98 quads of primary energy in 2017. Performance standards ensure that all products sold in the country meet a minimum level of efficiency. The United States has set standards for more than 60 products that are expected to save consumers more than $2 trillion on their energy bills cumulatively by 2030, and save a typical household over $500 in energy bills in that year. The graph shows annual savings from appliance standards in recent years.

Heat is a byproduct when a power plant burns fuel to produce electricity. This heat is typically released into the environment as waste. But a CHP facility (also called a cogeneration facility), captures the waste heat and uses it to heat or cool nearby buildings and industrial processes. Industries currently represent over 80% of all installed CHP capacity in the United States. Some hospitals, universities, and large office and housing complexes also use CHP to generate part of their electricity and heat on site.

Roughly a third of transportation energy in the United States is used to move goods rather than people. Although the sector is complex, the largest energy use is by long-haul tractor trucks, the large freight-hauling trucks with sleeper cabs. For simplicity we look at the average fuel economy required for those trucks. The first fuel economy standards for trucks and buses, adopted in 2011, took effect in 2014, as shown in the graph. In August 2016 the U.S. Environmental Protection Agency and the Department of Transportation issued a second set of standards for trucks and buses through 2027. We estimate that under these standards long-haul tractor truck fuel economy will increase to 8.2 mpg by that year. The fuel efficiency of other freight modes (rail, air, ships) also is increasing, but more slowly.

Fuel efficiency and less driving have helped keep US oil consumption almost at the same level since 2000. At the same time, most of the oil reserves in the world exist outside the United States. Our domestic oil production has been rising, thus we currently import about 20% of the oil we consume, down from 49% in 2010. Energy efficiency can go a long way to help reduce dependence on imports by helping vehicles travel farther on each drop of oil

We released billions of tons of greenhouse gases (GHG) into the atmosphere over the past hundred years, and we continue to release them. Over 77% of these emissions come from burning fossil fuels to produce energy for heating, cooling, lighting, transportation, industry, and other uses. Improving energy efficiency in buildings, vehicles, and industrial processes reduces emissions while saving money and providing the same or better products and services.

The EPA has a long history of working with states to address GHG emissions and air pollution. Energy efficiency policies and technologies are proven, cost-effective strategies to help states reduce their GHG emissions by reducing energy demand.